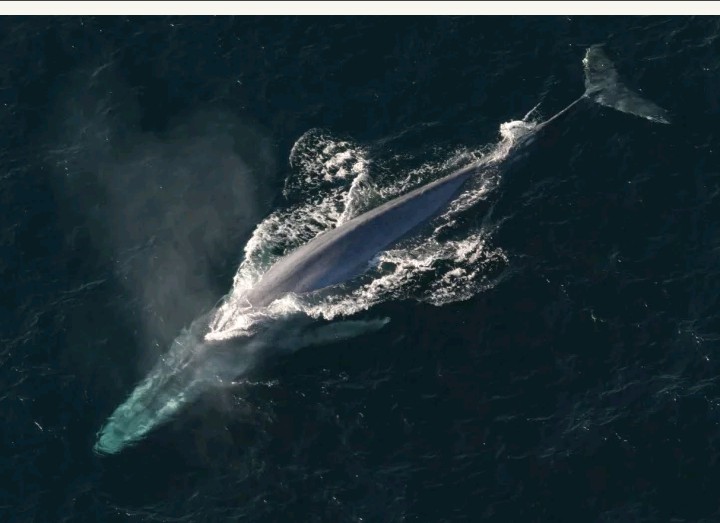 Believed to be the biggest animal that has ever lived on earth, Blue Whales are one of the world’s most fascinating creatures not just for their size but also for their many other unique qualities.
Despite their intimidating size, these sea monsters are one of the ocean’s most peaceful creatures.
Here are 13 more facts we know about the blue whale:
1. Blue whales are the largest animals ever to have lived on the earth. Measuring up to 100 feet (30 metres in length), the longest blue whale ever recorded was up to 108 feet in length.
2. They can weigh as much as 200,000 km (400,000 pounds).
3. The tongue of the blue whale is as big as an elephant!
4. Their hearts are not left out either. These gentle giants have hearts that are about 5 feet long, 4 feet wide, and 400 pounds in weight. Their heartbeats can be heard from as far as two miles away.
5. As enormous as these sea creatures are, they feed on tiny animals called krills. A whale’s stomach can hold up to 2200 pounds of krills at a time. In fact, they feed on almost 9000 of these crustaceans daily and a whopping 40 million krills daily during the summer.
6. In addition to being the largest, blue whales are the loudest animals on the planet. Their calls can be heard from up to 1000 miles (1,600 kilometers) away.
7. Blue whales are among the planet’s oldest living creatures. Their average life span is around 80 to 90 years and they can live for up to 100 years.
8. Despite their large size, blue whales are excellent swimmers. They cruise the ocean at about 8 km/hr and can reach speeds of over 30 km/hr.
9. Blue whale calves weigh up to 27,000 kg and can measure up to 26 feet in length, making them the biggest babies on earth.
10. They are a rich source of oil. Due to this discovery, they were hunted for decades, leading to a drastic decrease in their numbers. It wasn’t until 1967 that they received worldwide protection, saving them from mass extinction.
11. Due to climate change and the impact of ship strikes, The International Union for Conservation classifies them as Endangered. The entire population of blue whales left ranges from about 10,000 to 20,000.
12. Perhaps due to their long life span, blue whales have the ability to form bonds with other living creatures. They are said to be affectionate towards those who rescue them, suggesting that they have feelings.
13. A female blue whale has an interesting manner in which it nurtures its young. It will lift its newborn calf to the surface of the ocean in order for it to breath in some air. Other females around may also assist in nudging the young calf to the surface of the water to breathe.
https://reterdeen.com/13-interesting-fa

NYSC : 10 things to do during your service year as a corper.