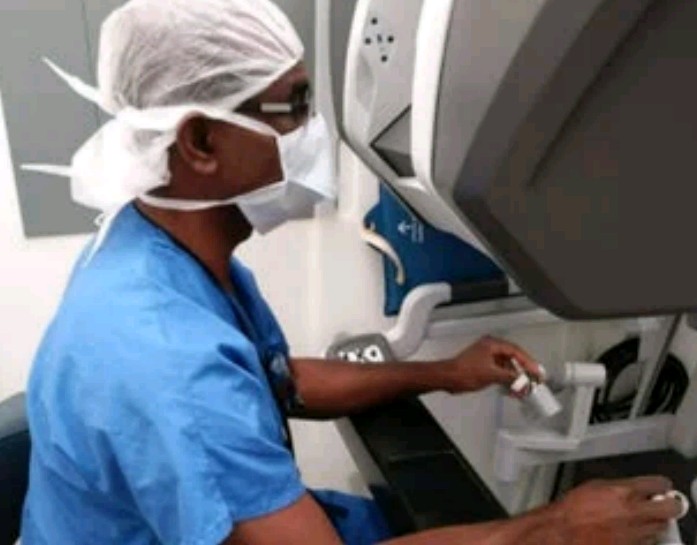 Fayetteville Veteran Affairs Medical Centre, North Carolina (NC), in collaboration with the Department of Defense (DoD), has broken new ground in the field of medicine and surgery by recording its first robotic surgery using the Da Vinci surgical technology.

The Da Vinci surgical technology is a state of the arts technology designed to enable surgeons perform complex surgeries through minor incisions using minimally inversive technique.
Da Vinci technology was approved by the FDA in 2000 as the first surgery system technology for general laparoscopic surgery in US hospitals, according to RoboticOncology.com, and since then, the use of this cutting-edge technology by surgeons has been on the rise due to its stated effect on cost reduction.

The surgeon at the console, steering this pioneer joint project is Nigerian-born prodigy and celebrated surgeon, Dr. Obinna Igwilo, who worked with a team of clinicians and other employees of the Fayetteville Coastal Healthcare system.
Igwilo, a native of Abia State, Nigeria, is a pioneer of the robotic surgery, which he had been working on since 2014.

He has worked with a team of clinicians and other employees of the Fayetteville Healthcare Centre. His efficiency was described by his employers as an “active engagement with the training of medical students and surgical residents while also serving as clinical Assistant professor of surgery with Campbell University School of Osteopathic Medicines”.

The surgeon’s robotic surgery would remain a historic event been the first to be performed in the 80-year-old hospital. The exploit of Igwilo in medical practice has brought pride and inspiration in the heart of both the young and old, his success and accomplishment has been recognised by his Alma mater, Ngwa High school Aba and the school has been in a festive mood.

The ground breaking surgery in North Carolina by Nigeria- born surgeon shows clear testimony of the leading role led by Nigeria doctors both at home and abroad in promoting health and also advancing the cause of humanity.
Igwilo holds the fellowships of The Royal Colleges of Surgeons (FRCS) Glasgow and Edinburgh, and American College of Surgeons (FACS).

A member of SAGES Society of American Gastro-intestinal and Endoscopic Surgeons, with special surgical interests in Robotic/laparoscopic/minimally invasive surgery; Endocrine and Colorectal surgery, Igwilo has been performing robotic surgeries since 2014.

A consultant General Surgeon at VAMC and WAMC, he has been cited by his employers for his “active engagement with the training of medical students and surgical residents while also serving as clinical Assistant Professor of Surgery with Campbell University School of Osteopathic medicine”

Igwilo attended Ngwa High School Aba in Abia State, where he was nicknamed ‘Archimedes” – after the Greek Mathematician and Physicist – because of the ease with which he handled math the very elusive subject loathed by many of his peers. He graduated from Ngwa High School in 1980 with a distinction. The same year, he was admitted to the University of Nigeria College of Medicine and Surgery, graduating in 1986 with MB.BCh.

Following his Internship at University of Nigeria Teaching Hospital (UNTH), Enugu, and Clinical externship at Whipps Cross University Hospital in London, UK, among numerous clinical exposures in Europe and America, the budding MD emerged onto the US medical ecosystem, making sure to take a front seat in the ever-changing and technologically-driven world of medicine and surgery.