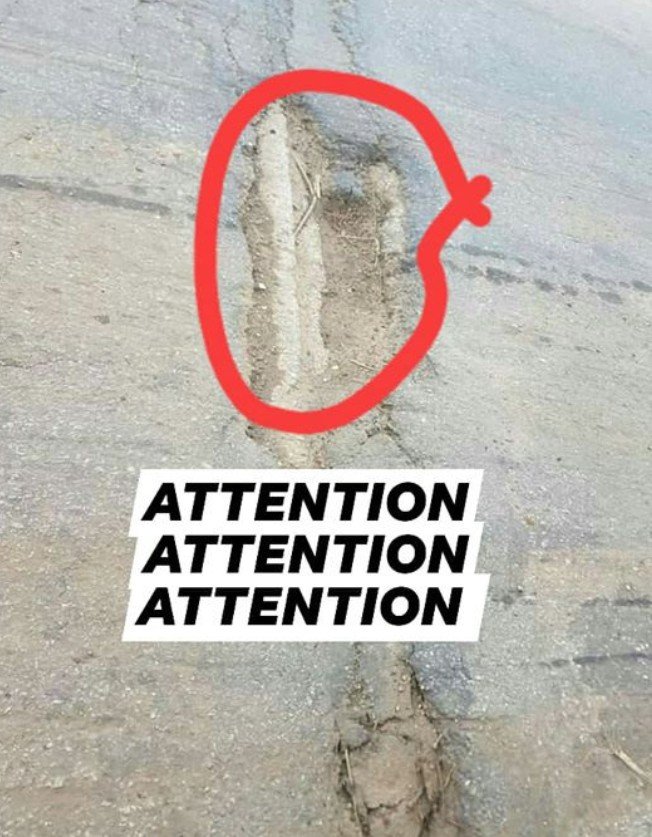 An Electrical Engineer, Adekoya Hardeymorlah has raised alarm over what he suspects to be the reason vehicles have been plunging into the Ososa River.

Also, a bus plunged into Ososa river on Sagamu-Ijebu Ode Expressway last Wednesday in an attempt to overtake other vehicles on the bridge.

Adekoya claims that two metal steels protruding from a pothole on Ososa-Ijebu bridge could be the cause. He wrote;

I wish to draw the attention of the general public to the cause of accidents on the Ososa-Ijebu bridge that has claimed many lives recently.

Please check the picture, and enlarge it. You will see two metal steels protruding from the pothole section of the bridge, those are the steels that cut through vehicle tyres, burst them causing the vehicles to summersault into the river.

Let us be careful when plying the road.” He wrote.

Meanwhile, the Ogun Command of the Federal Road Safety Corps (FRSC) says it has yet to recover the corpses of the victims six days after the bus plunged into Osaso river.

Mr Clement Oladele, the Ogun Sector Commander of FRSC, who made the disclosure in an Interview with the News Agency of Nigeria(NAN) in Ota, Ogun, on Tuesday, said  that the continuous rainfall around Sagamu and Ijebu Ode had made the recovery of the corpses and bus difficult for the FRSC divers.

He said the level of water in the river had continue to rise above the normal level when there was no rain, adding that this hindered the rescue operation.

“We will continue to search for them to ensure that their corpses were recovered from the river,” he said.

He advised the people to enter buses at registered motor parks with manifest so that such information could be used to send messages to their relatives when accidents occur. The FRSC boss also said that no relatives of the last week accident victims had reported that any of their family members were missing.

Related Topics:Ososa-Ijebu Bridge
Up Next