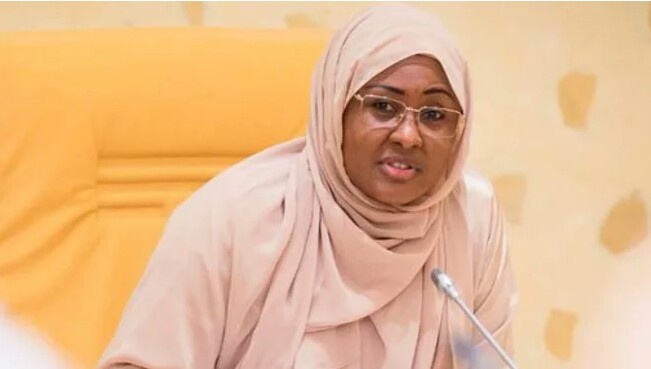 President Muhammadu Buhari’s wife, Aisha, will arrive in the country on Sunday (today), Sunday OKAYWAVE report.A top presidential source told one of our correspondents on the telephone on Saturday that the First Lady departed London, where she had been for about two months.“I can authoritatively confirm that Her Excellency has left London and is on her way back home.“She has even announced it on her Twitter handle that the wife of the Nigerian High Commissioner to the United Kingdom saw her off. We are expecting her,” the source said on Saturday evening.Aisha had earlier posted on her verified Twitter and Instagram handles, “Wife of the Nigerian Ambassador to the United Kingdom, Mrs Modupe Oguntade, seeing me off. Thank you so much, madam.”The posts were accompanied with a picture of the First Lady, decked in a red jacket and black turban, speaking to Mrs Oguntade, who donned a fur jacket.Aisha has not been in the country for nearly three months since the completion of the Hajj in Saudi Arabia between August 9 and 14.She reportedly jetted out of Saudi Arabia, where she went in company with her husband, to London, where she had remained since.Her long absence in the country fuelled speculations that she deliberately left the Presidential Villa in protest against certain issues at the seat of power.The First Lady’s prolonged absence at the Villa became pronounced as she did not attend public functions that she ordinarily would have attended.She was said to have been absent during the mid-August Eid-el-Kabir celebration in Daura, Katsina State, even though her husband was around to welcome world leaders such as the President of Guinea, Alpha Conde.The Senior Special Assistant to the President on Administration, Dr Hajo Sani, had reportedly been representing the First Lady on a number of occasions of recent, including an event of the Organisation of African First Ladies for Development, which held on September 25, 2019 on the sidelines of the 74th United Nations General Assembly in New York, United States.Aisha had publicly raised issues with her husband’s administration, including stating that persons who did not contribute to her husband’s election victory were calling the shots at the Presidency.She had also canvassed more roles for women in government, specifically asking the leadership of the ruling All Progressives Congress to ensure that more women and card-carrying members of the party were given prominent positions in the government after Buhari won a re-election in February.The President’s wife had also criticised some of the administration’s policies, including the N500bn Social Investment Programme, which she said had failed “woefully” in the North in particular.Aisha, who hails from Adamawa State, had noted in May 2019 that the situation in her home state, as far as the implementation was concerned, was pathetic.Meanwhile, there was controversy during the week as social media was awash with rumours that President Buhari was to marry the Minister of Humanitarian Affairs, Disaster Management and Social Development, Sadiya Umar Farouq, as his second wife.Though the ‘wedding’ never took place, many worshippers trooped to the Presidential Villa Mosque on Friday where the President went to observe the Jumat prayer with the hope of witnessing the rumoured wedding.