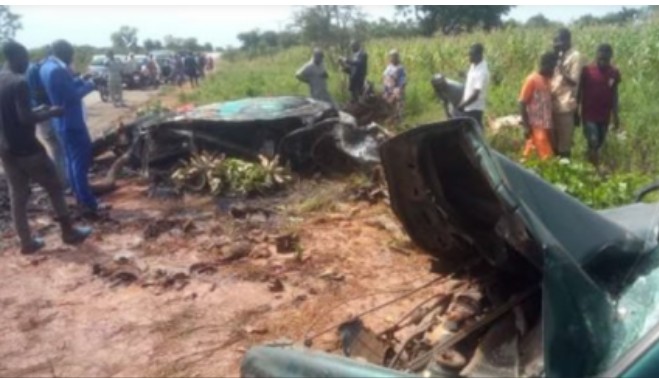 Five people were on Sunday afternoon, October 6th burnt beyond recognition in a motor accident that occurred along the Kaduna-Kachia Road in Kaduna State, Punch report.

The accident, which happened in a bush about 56 kilometres away from Kaduna, involved two vehicles.

While one of the vehicles is a car with registration number JJJ 220 BB, the second vehicle was burnt beyond recognition.

It was gathered that three of the passengers were inside the burnt car, which was still smouldering at the time of this report. Another charred body of a passenger was seen beside the burnt car. Two passengers, who were not burnt, were seen lying dead with one of them having broken legs, while some of his teeth had fallen off.

Two military uniforms in a suitcase were seen among the personal effects scattered at the scene, making observers to believe that one of the victims might be a military personnel.

The uniforms were not torn, neither were they burnt.

A man who was seen controlling traffic at the scene of the incident, claimed that although he was not there when the accident happened, the driver of one of the cars, who sustained severe injuries was brought out alive and rushed to a hospital for medical attention.

He said, “I got to the scene when the accident had happened. It was a head-on collision caused by excessive speeding. As you can see, several people died in the accident and some were burnt beyond recognition.

“The driver of one of the vehicles was brought out alive and rushed to the hospital, but he was badly injured. A military officer is among the victims, but we are yet to know his identity.

“The two military uniforms, which he was carrying, have no name tags, so we are yet to know who he is. It is very sad and unfortunate.”

Related Topics:Car crash along Kaduna kachia road
Up Next