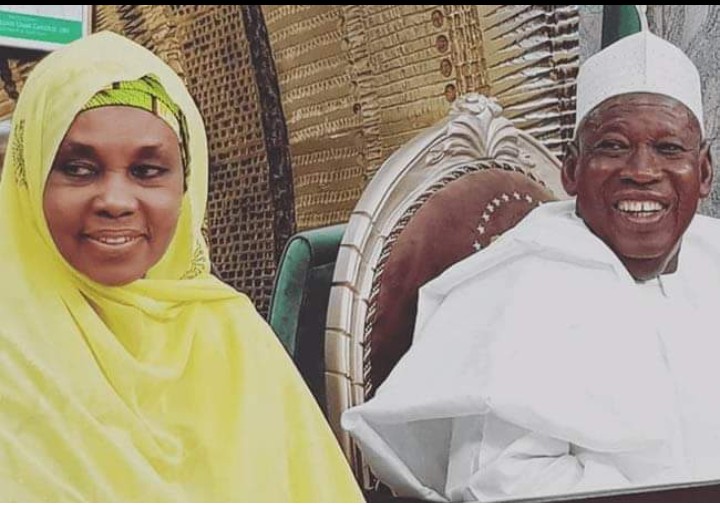 Dr. Hafsat Ganduje,first lady of Kano State has been named an Associate Professor by The Governing Council of Maryam Abacha American University of Niger.

Mrs. Ganduje is currently a lecturer at the Department of Education, Bayero University, Kano.

This is contained in a statement signed by the President and Founder of the university, Prof. Adamu Abubakar-Gwarzo, and made available to News Agency of Nigeria in Kano on Tuesday.

According to Prof. Gwarzo, a delegation from the university, led by Prof. Muhammad Magaji-Rano, presented the letter to Hafsat at the Government House, Kano on September 15.

Other members of the delegation includes  Prof. Ibrahim Maigari and Dr. Bala Muhammad-Tukur, Director, (Linkages and Collaboration) of the university.

Speaking shortly after presenting the letter, Muhammad-Tukur said the decision to name her for the new rank was based on her record of teaching, research service and comprehensive review of her scholarly work.

“I am happy to inform you that the governing council of Maryam Abacha American University has approved your promotion to the rank of Associate professor (Administration and Planning) effective from August 14, 2019.

“Your elevation to such a higher rank is based on your record of teaching, research service and comprehensive review of your scholarly work as well as your commitment to the promotion of education,” he said.

He noted that the decision by the Kano State Government under the leadership of Ganduje to introduce free and compulsory basic and secondary education would go along way in the development of the state.

“The President and Founder of the university, Prof. Adamu Abubakar-Gwarzo, has directed me to tell you that he has named one of female hostels at MAAUN College of Health Sciences and Technology Kaduna, Professor Hafsat Ganduje Hostel.

“The Maryam Abacha American University Niger will never forget the honour you have done the university.

“You and Governor Abdullahi Ganduje took the pain to attend the first convocation ceremony of the university in Niger Republic.”

Responding, Hafsat thanked the President and Founder of the university for establishing the university as well as his commitment to the development of his area and called other people with the wherewithal to emulate him.

She also commended Abubakar-Gwarzo for this decision to establish similar university in Kano and Kaduna and expressed hope that he establishes similar institutions in Southern part of Nigeria and other neighbouring French speaking countries.