Iyanya pleaded not guilty to car theft charges; as court adjourns case to feb till 27th. 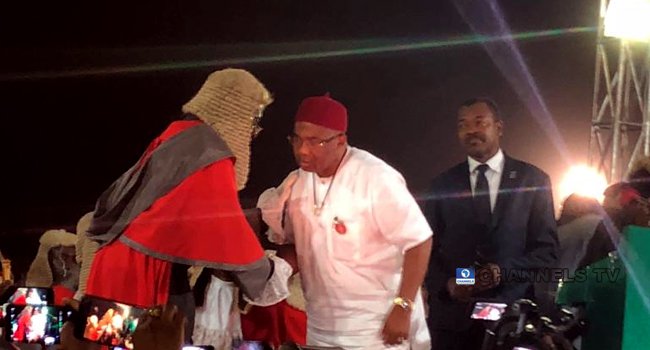 The appointed Governor of Imo State Gov. Hope Uzodinma of the All Progressives Congress (APC) who was on Tuesday declared Imo State governor-elect by the Supreme Court, took the oath of office during a simple ceremony at the Heroes Square in Owerri, the state capital.

He arrived at the venue from Abuja with his wife, children and his running mate, Prof. Placidius Njoku, at about 7.15 pm today.
Chief Judge Justice Paschal Nnadi, administered the oaths of office and allegiance on him.The Supreme court, in its judgment directed Mr. Emeka Ihedioha, who was declared winner of the election by the Independent National Electoral Commission, to vacate office immediately.

Delivering his first address, Uzodinma announced his intention to look into the accounts and contracts awarded from May 29, 2010 till date.The period covers the tenures of Chief Ikedi Ohakim, Senator Rochas Okorocha and the short-lived tenure.

Uzodinma directed the Accountant-General to forward to his office all financial transactions between May 29, 2010 till date within four working days.

The governor also asked permanent secretaries to forward to his office, all contracts awarded and their statuses within the same period.

Ohakim, who was the Accord Party candidate in the same election, served as governor between 2007 and 2011.

Although Okorocha did not vie in the election, having served out his two tenures, he openly supported his son-in-law, Uche Nwosu,of the Action Alliance.

Nwosu’s case was one of the Imo cases listed for hearing by the Supreme Court before he made a U-turn by withdrawing it a few hours before the judgment.

Uzodinma directed the suspension of all payments and treasury transactions by financial institutions managing the state’s accounts.

Before the new governor arrived from Abuja where he was issued Certificate of Return by INEC, he, through his Campaign Organisation, asked the financial institutions to place a lid on the accountsUzodinma said at the ceremony that he felt highly fulfilled that justice had at last been served,. He described his Supreme Court victory as divine.

The governor commended the judiciary for standing up for the truth in spite of the technicalities employed by the lower courts to deny him victory.

Uzodinma, who said he had forgiven those who conspired to deny him victory, promised to create an environment of prosperity in the state. He also urged his oppositions to join him in rebuilding the state.

Mbaka, a Catholic priest and founder of the Adoration Ministry in Enugu, rightly predicted that Uzodinma would displace Ihedioha as governor.