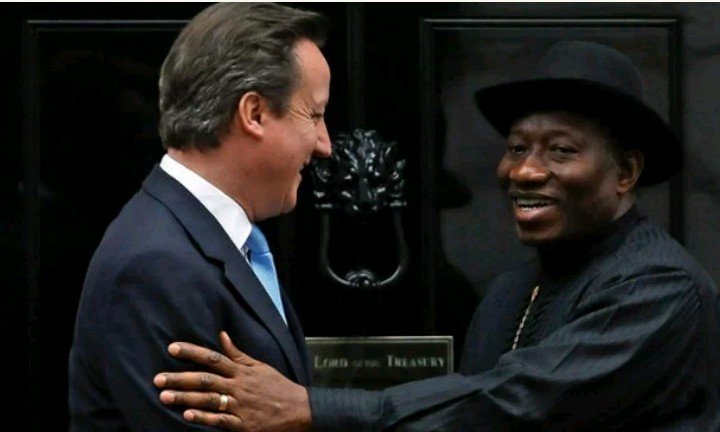 A former Prime Minister of the United Kingdom, David Cameron, has revealed why former President of Nigeria,

Goodluck Jonathan, prevented them from rescuing the girls abducted from a secondary school in Chibok, Borno State, by Boko Haram terrorists in April 2014.

According to Cameron, Jonathan prevented British forces from engaging in rescue efforts as he seemed to see the entire incident as cheap politics.

In his recently published memoir, ‘For the Record’, Cameron, who was in office at the time of the abduction, said British troops traced the location of some of the victims and offered to help but Jonathan refused, according to TheCable.
Cameron wrote, “In early 2014, a group of fighters entered Government Secondary School in the village of Chibok, seizing 276 teenage girls.

“They were taken to camps deep in the forest. The Christians among them were forced to convert to Islam. Many were sold as slaves, entering the same endless violent nightmare the Yazidi women suffered.

“As ‘Bring Back Our Girls’ campaign spread across the world, we embedded a team of military and intelligence experts in Nigeria, and sent spy planes and tornadoes with thermal imaging to search for the missing girls. And, amazingly, from the skies above a forest three times the size of Wales, we managed to locate some of them.

“But Nigeria’s President, Goodluck Jonathan, seemed to be asleep at the wheel. When he eventually made a statement, it was to accuse the campaigners of politicising the tragedy.

And absolutely crucially, when we offered to help rescue the girls we had located, he refused.”

Jonathan’s spokesman, Ikechukwu Eze, could not be reached for comment on Saturday.

However, the former President had said in an interview on BBC last year that he could not be held responsible for the abduction of the Chibok girls.

Jonathan said rather, Boko Haram should be blamed for the abduction of the girls because as a President he could not go to the battlefield to fight insurgents.

He said, “I cannot take responsibility for the abduction, I don’t control Boko Haram. They are criminals.

“But as a President, of course you know it is not the President that goes to the field. You have security and intelligence officers that do the work.

“Let me admit that yes, maybe they did their best but their best was not good enough for us to recover the girls.

“That I cannot say I am right or I am wrong. That does not mean I am trying to remove myself from any blame.”

You Lied! Goodluck Fires Back At David Cameron’d Allegation That He Refused UK’s Help To Rescue Chibok Girls