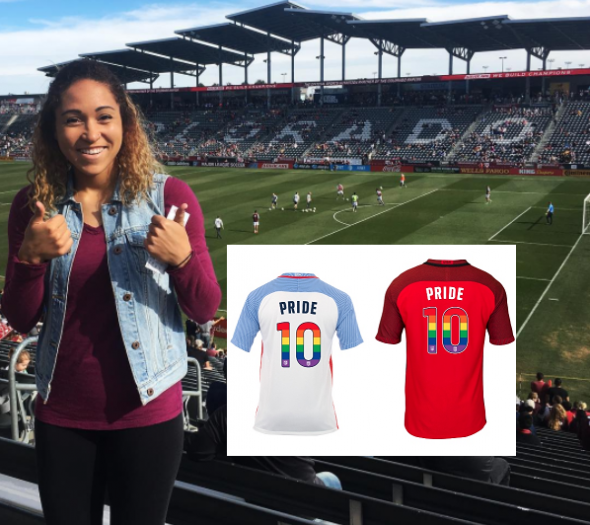 Christian soccer player Jaelene Hinkle, 24, has withdrawn herself from the roster of the national U.S. Soccer team for two international friendlies this month citing “personal reasons” after it was revealed that players will have to wear gay pride jerseys (inset).

Two weeks after U.S. Soccer announced that both their men’s and women’s national teams will be wearing rainbow-colored jerseys in support of gay pride in June, Christian soccer player Jaelene Hinkle has withdrawn herself from the U.S. roster for two international friendlies this month, citing “personal reasons.”

A release from U.S. Soccer said Hinkle, 24, who is a defender for the North Carolina Courage, was called into the national camp to play international friendlies against Sweden and Norway this month. She was not replaced on the roster after her withdrawal.

It is unclear if U.S. Soccer’s celebration of gay pride this month is related to Hinkle’s withdrawal but she wears her faith proudly on social media.

She proudly boasts Colossians 3:23 on Twitter which says: “And whatsoever ye do, do it heartily, as to the Lord, and not unto men.”

“If you live for people’s acceptance, you’ll die from their rejection,” the tagline also notes.

She also converted a gay pride logo into a celebration of the cross on Instagram the same day the Supreme Court ruled in favor of same-sex marriage in 2015 while sharing her thoughts on the decision.

“Jesus didn’t come to save those who already believed in Him. He came so that the lost, rejected, and abandoned men and women would find Him and believe. I believe with every fiber in my body that what was written 2,000 years ago in the Bible is undoubtedly true. It’s not a fictional book. It’s not a pick and choose what you want to believe. You either believe it, or you don’t. This world may change, but Christ and His Word NEVER will,” she said.

“My heart is that as Christians we don’t begin to throw a tantrum over what has been brought into law today, but we become that much more loving. That through our love, the lost, rejected, and abandoned find Christ.”

Hinkle went on to declare that the rainbow, despite its current affiliation with the gay pride movement, is a symbol of God’s promise to mankind.

“The rainbow was a convent (sic) made between God and all his creation that never again would the world be flooded as it was when He destroyed the world during Noah’s time. It’s a constant reminder that no matter how corrupt this world becomes, He will never leave us or forsake us. Thank you Lord for your amazing grace, even during times of trial and confusion,” she said. “Love won over 2,000 years ago when the greatest sacrifice of all time was made for ALL mankind.”

LGBT advocates who later chastised her online for stating her Christian beliefs said they were looking forward to her wearing the gay pride jerseys.

U.S. Soccer is undertaking a number of initiatives in partnership with the LGBTQ advocacy group You Can Play Project to celebrate gay pride month.

“As the highlight, the U.S. Men’s and Women’s National Teams will wear pride-inspired rainbow numbers during the June friendlies. The MNT will debut the look for the World Cup Qualifying tune-up against Venezuela on June 3 at Rio Tinto Stadium in Sandy, Utah. The WNT will wear the kits in away friendlies against Sweden on June 8, and Norway three days later,” U.S. Soccer said.

Steve Harvey Declares ‘Thanks Be to God’ After Emmy Award Wins