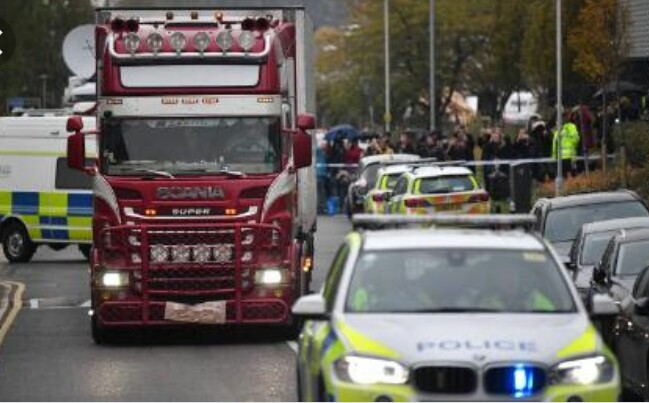 A suspected person has been arrested over the deaths of 39 people found in a truck at an industrial estate near London.

British police said the 48-year-old from Northern Ireland was arrested at London’s Stansted Airport on Friday on suspicion of conspiracy to traffic people and manslaughter.

Earlier on Friday a man and woman, both 38, were detained in Warrington in northwest England on suspicion of conspiracy to traffic people and 39 counts of manslaughter.

A 25-year-old truck driver remains in custody after being arrested on suspicion of murder following discovery of the bodies in the back of his refrigerated truck in the early hours of Wednesday.

The victims – 31 men and eight women – are being moved to a hospital mortuary from a secure location at docks near the industrial estate in Grays, about 30km east of London where the bodies were found.

Police have said they believe the dead were Chinese but a Chinese Foreign Ministry spokeswoman said the nationalities had not yet been verified.

A human rights advocate based in Vietnam said at least one of the deceased might have been Vietnamese.