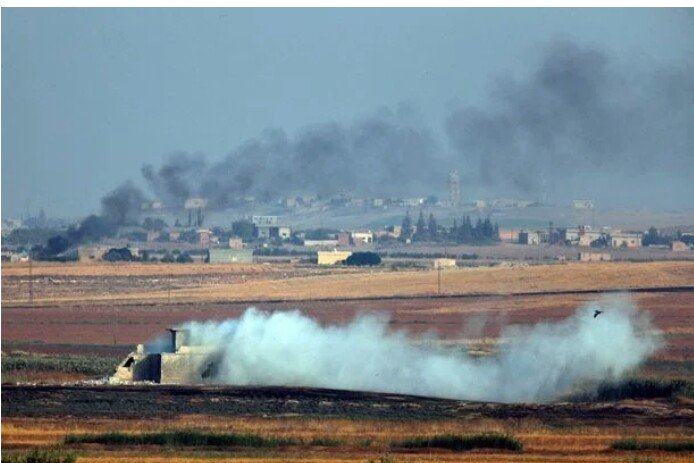 Turkey launched its incursion into areas of northern Syria on Wednesday to excise a U.S.-backed Kurdish militia, Turkish officials said on Wednesday. The move frustrates calls by U.S. lawmakers to prevent what many believe would be an abandonment of an important ally against Islamic State.

Turkish President Recep Tayyip Erdogan announced the start of the Turkish blitz — dubbed “Operation Peace Spring” — on Twitter, even as news channels began to beam images of Turkish artillery and warplanes pounding parts of northern Syria controlled by the Syrian Democratic Forces, a Kurdish-led group of militias that have for years received backing from the U.S.

“Our mission is to prevent the creation of a terror corridor across our southern border, and to bring peace to the area.”

A spokesman for the Syrian Kurdish forces, Mustafa Bali, confirmed that Turkish warplanes had begun airstrikes on areas near the Syrian border.

The operation comes after the Trump administration had announced in recent days it would stand aside before a proposed Turkish incursion and withdrew U.S. troops. The move brought opprobrium even from Trump’s staunch Republican allies, who excoriated the president for allowing one U.S. ally, Turkey, to attack another ally in the Kurds.

For their part, the Kurdish-led administration that controls northeast Syria called for a three-day “general mobilization,” exhorting all people under its lands to head to the borders with Turkey “and do their moral duty and do resistance in these historic sensitive moments.”

For days, Syria’s northeast, home to the Kurds’ semi-autonomous proto-state, had been under complete paralysis.

“We thought the Americans were staying, and that the political equations would progress and the area would peacefully move to the next stage in Syria,” said Omar Rassoul, a 57-year-old writer from the city of Malkiyeh, in a phone interview on Wednesday.

Malkiyeh was far away from where Turkish troops had entered. But it didn’t matter, Rassoul said. Commercial life had virtually come to a standstill, though the first rains had come and it was time for planting seeds, most farmers hadn’t gone to their farmlands for fear of an invasion.

“Now there’s no hope for the future. There’s just a lot of fear. … We don’t know if overnight we’ll become victims or migrants,” Rassoul said.

For years, Erdogan has clamored for the U.S. to abandon the Kurdish forces, which forms the core of the Syrian Democratic Forces that has risen to become the U.S.’s top partner in Syria against Islamic State.

Turkey, however, sees the force as a terrorist offshoot of Kurdish separatist movements it has fought at home and wants to excise them from the area, despite U.S. assurances and attempts at forging a security mechanism amenable to Ankara.

On Sunday, Ankara appeared to get its wish: President Donald Trump ordered the withdrawal of American troops from Syria, clearing the path for a Turkish incursion.

The decision came as a shock to the United States’ Kurdish partners.

“We were together on a patrol on Sunday. We got back and were supposed to meet at noon the next day,” said Khalil Khalfo, a commander in the Tal Abyadh Military Council, a militia under the Syrian Democratic Forces, in an interview on Wednesday.

“That morning at six we got a message telling us they’re leaving. That was it.”

Trump, facing intense pressure from all corners, including his own Republican allies, later walked back his comments and threatened “to obliterate” Turkey’s economy if it went too far, even as he insisted on Twitter on Tuesday that “in no way have we Abandoned the Kurds,” who he said were “special people and wonderful fighters.”

Yet that sentiment has done little to stop the march toward conflict.

On Wednesday, Turkish Defense Minister Hulusi Akar said in a speech from Istanbul that Turkey’s preparations and deployments were ongoing, according to state news operator Anadolu.

Fahrettin Altun, a communications director with the Turkish government, said on Wednesday that Turkish troops alongside Syrian rebels would “cross the Turkish-Syrian border shortly.”

“YPG militants have two options: They can defect or we will have (to) stop them from disrupting our counter-ISIS efforts,” tweeted Altun, referring to the Kurdish force by its acronym, and employing an alternative acronym for Islamic State.

Turkey has said it wants to push back the Kurds from a 20-mile corridor of territory stretching along the border with Syria. Once it establishes this so-called safe zone, it wants to ramp up humanitarian reconstruction and resettle there the millions of Syrian refugees currently in Turkey.

Despite Turkey’s assurances, aid groups expect any incursion to cause massive disruption. The International Rescue Committee said on Monday that as many as 300,000 people could be displaced from their homes.

Engineer Decries Possible Cause Of Accident On Ososa-Ijebu Bridge