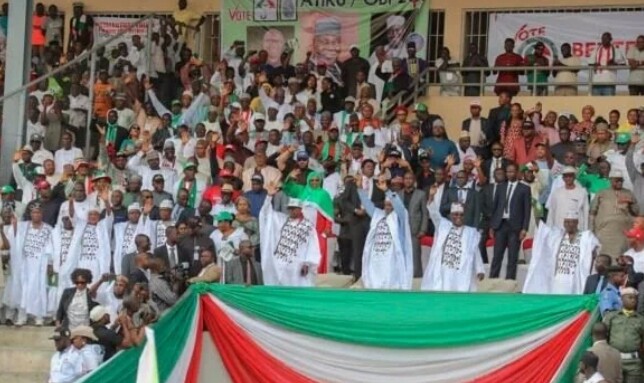 The Peoples Democratic Party (PDP) on Friday officially flagged off its governorship campaign for the November 16 Kogi State poll.

The National Chairman of the main opposition PDP, Uche Secondus, while presenting the Kogi governorship standard bearer, Musa Wada to party supporters, at the Lokoja Conference Stadium, said that the latter was in the best position to ensure prompt payment of salaries as well as improved standard of living.

Secondus also presented Senator Dino Melaye, who he described as a voice that cannot be silenced to party supporters.
He urged them to support him to return to the red chamber come November 16.

Wada told party supporters to expect improvement in their standard of living, as he is set to bring succour in place of the suffering imposed on them by the APC-led administration of Yahaya Bello.

Melaye led supporters in songs including “Wada in Bello Out” and “Bye Bye to Rederede.”

Seven governors, including Seyi Makinde (Oyo) and Seriaki Dickson (Bayelsa), chairman of the PDP Governors Forum, were on hand at the packed venue of the campaign flag-off