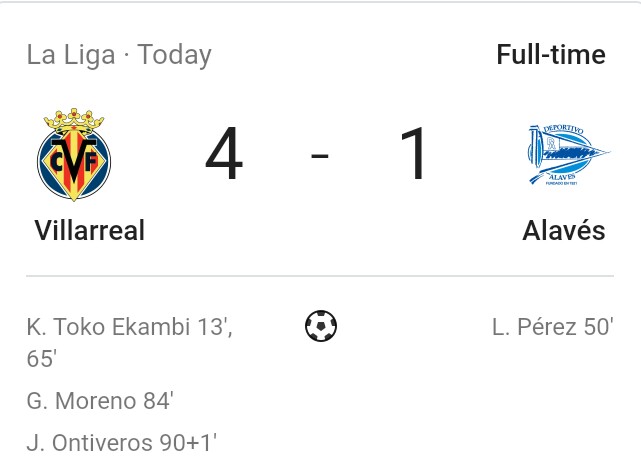 Villareal face Alves in La Liga. Following a 2-1 away defeat to newly promoted Osasuna before the international break, Villarreal needed to respond against Espanyol on Matchday 9 and they didn’t disappoint, grinding out an important three points at RCDE Stadium 0-1 thanks to an early strike from Karl Toko Ekambi and a number of fine from keeper Asenjo. El Submarino Amarillo crept up to 7th in the La Liga table as a result where they sit just a couple of points behind the Champions League places, and they can move into the top four this Friday evening, albeit temporarily, if they can follow up at home to Alaves. Javier Calleja’s side are solid favourites with the bookies to do just that – and it’s easy to see why based on their excellent form at Estadio de la Ceramica and Alaves’ prolonged struggles on the road. Villarreal’s first home game of the season was a sloppy affair as they tossed away a two-goal advantage to draw 4-4 with Granada, but Javier Calleja’s men haven’t put a foot wrong since at Ceramica. Following a credible 2-2 draw against Real Madrid on Matchday 3, Villarreal have gone onto comprehensive victories against Valladolid (2-0) and Real Betis (5-1), extending their unbeaten home run in La Liga to nine matches. 2nd March was the last time that Villarreal tasted defeat in front of their own supporters and ironically, that reversal came against this Friday’s opponents Alaves, who have enjoyed success in the last three league meetings between the pair, via a 2-1 scoreline on each occasion. It’s perhaps unwise to read too much into last season’s two encounters though. After all, Villarreal endured a pretty miserable campaign in 2018/19 and have clearly improved this term, whilst Alaves can’t buy a win on their travels at present. Babazorros have picked up just a single point from their four away matches this season (1-1 vs Getafe) and are now without a win in eight on the road, losing six of those outings and conceding 16 goals in total. Whilst Alaves will be in good spirits after securing a second consecutive 2-0 home victory against Celta Vigo at the weekend which inched them up to 14th in the standings, it’s unlikely that Asier Garitano’s side will match that level of performance here if recent away performances are anything to go by. And the hosts would be difficult to oppose at Ceramica against most teams at the moment. After smashing in 13 goals in their four home games so far this season, they should relish the task this Friday against an Alaves back line who are playing with zero confidence or cohesion away from Mendizorroza.