Rampant Watford end Liverpool’s invincible dream with emphatic victory. Ismaila Sarr scored twice while captain Troy Deeney added a third in a sparkling second-half display from the hosts as Liverpool’s run of victories was brought to a shuddering halt.The Reds had won their past 18 Premier League games and another at Vicarage Road would have made history as the longest winning run in the English top flight. 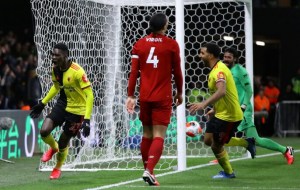 But they never got going against a Watford side who were superb from start to finish and who move out of the relegation zone as a result.

The Hornets had more chances in the first half and only a superb save from Alisson, to deny Troy Deeney, prevented them from leading at the break.

However, Watford deservedly went in front when Abdoulaye Doucoure squeezed a cross in from the left and the impressive Sarr was there to stab in. 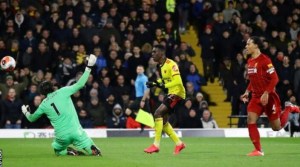 Liverpool had fallen behind against West Ham last week but still managed to grind out a win. However, there was a feeling that this time was different, with the Reds sloppy in possession and lacking bite in attack.

It was no surprise that Watford doubled their advantage. Sarr was put through on goal by Will Hughes and the winger calmly lifted the ball over Alisson and into the net.

Captain Deeney then completed a famous victory, curling into the back of the net from the edge of the area.

This is not a result that is going to halt Liverpool’s title charge with the Reds 22 points clear at the top but it was nevertheless an unexpected and memorable result for Watford.

Reaction to Liverpool’s defeat
Sarr the star for superb Watford

Beating Liverpool could kick-start our season – Pearson
Many had arrived at Vicarage Road expecting to see Liverpool make history by winning in the league for the 19th game in a row.

Indeed, such was the level of expectation that press accreditation for the game had been oversubscribed, with hundreds of media outlets keen to cover a moment in English football history.

But Watford were clearly not reading from the same script.

A superb run of four wins in five games at the start of Nigel Pearson’s reign had lifted them up from the foot of the table and out of the relegation zone but five games without victory prior to the visit of Liverpool had dropped them back into trouble.

Despite the recent poor run of results, performances had still been good and they were boosted for this game by the return from injury of Sarr.

The winger has been a real creative spark for the Hornets this season, and he was a menace from the outset, taking advantage of the surprising amount of space he was afforded on the wing to deliver a number of dangerous crosses.

His pace and trickery unsettled the Reds, who were unable to handle him and both his goals were taken with an assured calmness.

If he can remain fit for the remaining 10 games of the season then Watford have a real chance of retaining their Premier League status.

An off day for champions-elect Reds

Watford 3-0 Liverpool: Defeat feels ‘exceptionally average’ – Klopp
There is no getting away from the fact that Liverpool have been simply sensational this season and the only surprise is that they have been able to maintain a consistent level of brilliance for so long.

Recent performances have not been quite at the level they have been capable of, losing to a resilient Atletico Madrid in the Champions League before scraping past West Ham last week.

The Hammers showed that if teams attack the Reds defence then they stand a better chance of upsetting them and that was the case on Saturday as they struggled to deal with the Hornets’ high press.

A couple of wayward clearances from Alisson early on, when the Liverpool goalkeeper was under pressure, provided a hint of what was to come.

The defensive pairing of Virgil van Dijk and Dejan Lovren also looked vulnerable, certainly in comparison to the seemingly impenetrable Van Dijk-Joe Gomez partnership, with Gomez out because of a fitness issue.

It was an off day for the Reds and one that may provide them with renewed spirit to finish off in style what is sure to be a title-winning campaign but we should take nothing away from what was an excellent display by Watford.

Man of the match – Ismaila Sarr (Watford)
Ismalia Sarr scores for Watford against Liverpool
Watford’s record signing played a part in all three goals
‘It’s not hard is it, football?’ – what they said
Watford boss Nigel Pearson: “It’s such an important win for us. But it is one win. Our season has been tough so far, with losing last week and not playing well, we were keen to get a response.

“They are such an outstanding side, we had to get our performance right – as close to max as possible – and I thought we thoroughly deserved the win. We threatened with the ball and defended with discipline, energy and commitment. That’s been the message from day one.

“It’s in our own hands, and we have to deliver that performance week in, week out.”

Liverpool manager Jurgen Klopp: “They did exactly what they wanted to do, we did not. That’s how football works.

“You have to accept it, it’s not so easy, but it’s the proof we were not good enough. It’s always very difficult.

“If you win good, if you lose, try to do it in the right manner and do it like a man.”

Liverpool defender Virgil van Dijk: “Credit to Watford, they played well, a lot of fight, very disciplined and scored three goals – that’s the reality, we couldn’t find a way through. It was difficult and we have to do better. 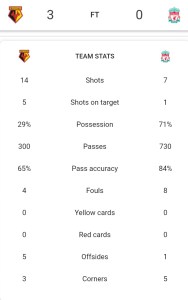 “The record and the talk of the records is all media, we just try to win every game.

“We will focus on the next game, the cup game, and we try to win there. We have to stay humble and work harder next game.”

Watford goalkeeper Ben Foster, speaking to Sky Sports: “Just do that every week. It’s easy if you do it like that – we had a game plan and stuck to it really well.

“Ismaila Sarr is a crazy good talent, he’s so calm in front of goal and has electric pace. Buzzing.

“It’s not hard is it, football? We stuck to our task and took our chances when they came.”