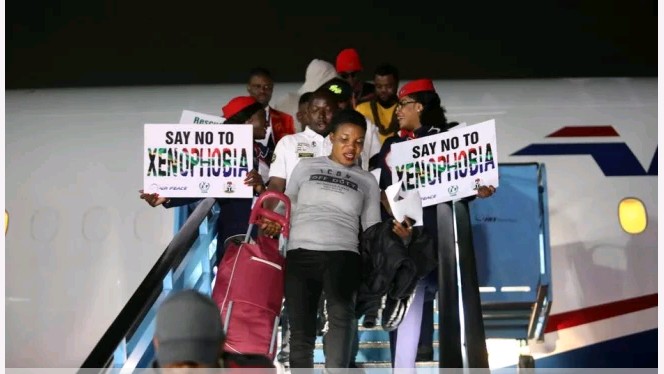 Following the Xenophobic attacks, not less than 817 Nigerians are expected to be evacuated from South Africa on Tuesday.

The Consul-General, Nigerian High Commission in South Africa, Godwin Adama,  in a telephone interview with news men , said there have been an increase in  number of those who had registered  for evacuation. As at last week, the number given by the Federal government was 604, which has now increased to 1004. According to him, 320 Nigerians will be evacuated on Wednesday . He said the technical difficulties faced during the last evacuation has been addressed.

He  however complained that some individuals, who registered for evacuation, had failed to show up. And this has discouraged the officials involved, he added.

Adama  explained that about five coaches were being filled with people for the trip to the airport, including many children.

He said, “We have been working since 6am when I got here (consulate). I have not sat down. We have 320 coming back tomorrow(Wednesday).Some people who are supposed to be on the flight, when you call their names, they are not here.  We have registered 1,004 persons.  When these ones go, we will still have people on the ground.”

Mr Adama further disclosed that those who do not have valid  Nigerian passport were being issued emergency travel certificates, adding that certain documentation and immigration issues had also been addressed.

He also disclosed that many Nigerians are being held in various detention facilities across South Africa, adding that the Nigerian High Commission was in touch with only 25 of them. In his words,;

“We are ready to take those who are in detention camps, but we don’t have space right now because they (South Africa) didn’t finalise the process. If we have the opportunity, next time, we would take them. When asked about the number, he said;

“I would not know the exact number now because we have not visited all the detention centres. We are in touch with 25 but they are far more than that in different centres,” Adama explained.