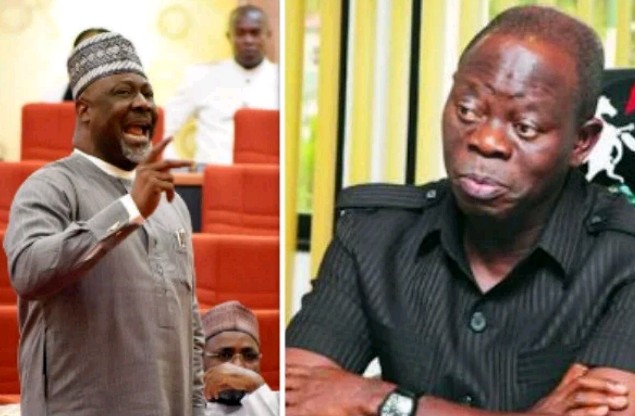 Senator Dino Melaye has responded to the All Progressives Congress, Adams Oshiomhole claim of him and other lawmakers who decamped to the People’s Democratic Party (PDP) alongside former Senate President Bukola Saraki being punished by the electorates for being disloyal.

The PDP’s Senatorial candidate who slammed Oshiomhole for saying he is 20,000 feet below ground level and may not win the rerun election for Kogi West Senatorial district, stated that the former Governor of Edo state is suffering from “verbal diarrhoea” and cannot determine the outcome of the supplementary election to be conducted by the Independent National Electoral Commission, INEC.

Dino Melaye who got featured on Channels Television said “The verbal diarrhea by the Chairman of APC boasting that 16 of us left the APC and I am the only one standing and in a matter of days, he said I will leave the Senate; I want to say that is human verdict but there is a God verdict.

“My seat will not be vacant, I will continue to be a senator of the Federal Republic of Nigeria by the grace of God in the next four years.