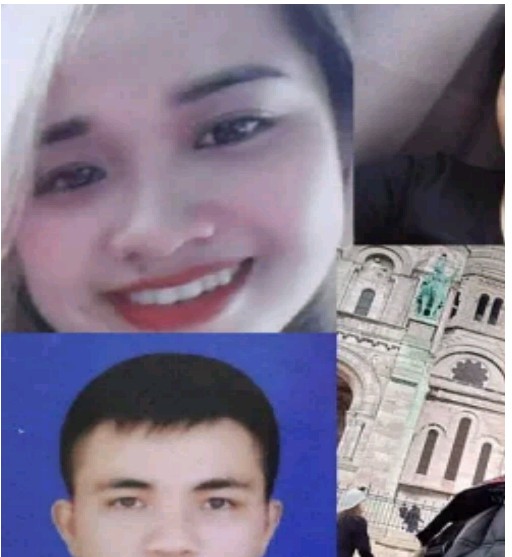 39 migrants were found dead in a truck in Essex, most of them naked or with minimal clothing with foam coming out of their mouths. The identities of some of the victims have now been revealed as their families narrate their reason for migrating.
The 8 women and 31 men found dead in the truck are believed to have been frozen to death in the back of a truck after a desperate attempt to reach Britain. Before they died, they had desperately “banged on the doors” for help.
They were discovered on Wednesday, October 23, in Grays, Essex, after the container criss-crossed the Channel via refugee hotspots.
All 39 people discovered in the truck have been moved from Tilbury Docks to Broomfield Hospital in Chelmsford and are being formally identified.
VietHome, a UK-based organization that assists the local Vietnamese community, sent photos of nearly 20 people reported missing to British police.
The BBC said it has been in contact with six Vietnamese families who fear their relatives are among the dead, with some having the smuggling fees repaid.
So far, the identity of some suspected victims have come to light. They are Anna Bui Thi Nhung, Pham Thi Tra My, Nguyen Dinh Luong, Nguyen Dinh Tu and Vo Ngoc Nam.
Anna Bui Thi Nhung, 19, from Vietnam, is an aspiring nail technician. She paid an agent over $10,000 with the hope of entering the U.K. to work as a nail technician, according to a relative.

One of Nhung’s relatives said her family heard from a friend living in the UK that “Nhung is one of the victims”.
On October 21, days before her family lost contact with her, Nhung wrote on Facebook: “Being grown up means having to hide your sadness in the dark, and keeping a smile on your face.”
Nhung’s family said she first left Nhung on her journey overseas in August. She went to China first, before eventually making her way to Germany, then Belgium, where they believe she boarded the ill-fated truck.

A photo she shared a few weeks after leaving Vietnam was captioned: “I just want a peaceful life.”
Then, on September 25, after she had left Vietnam on the journey she hoped would lead her to Britain, she posted online: “I feel lonely in the place I used to dream of everyday.”
After receiving news that she’s on of the suspected victims, her mother and a sister cried as they set up an altar with incense and a photo of her where family and friends can pray at their home in Do Thanh village.

Her photo was placed next to her father’s. Her father died of cancer a few years ago. Her mother was unable to work because of health complications and so her loved ones contributed to finance a new life overseas for the teenager, Nhung’s family told Reuters.
Nhung’s uncle, Hoang Binh said: “Nhung didn’t have the qualifications to get a good job with handsome pay. Nor do her friends and many others here. Going abroad and sending back money was the only choice.”
Pham Thi Tra My, 26, from Vietnam, is another suspected victim. She sent her mother a series of harrowing messages telling her she “loved her” and was “dying because she couldn’t breathe” in the moments before her death, her family have claimed.

Pham Thi Tra My, 26, from Vietnam, is another suspected victim. She sent her mother a series of harrowing messages telling her she “loved her” and was “dying because she couldn’t breathe” in the moments before her death, her family have claimed.

She is from Ha Tinh, an impoverished province in a part of Vietnam where many of the country’s illegal migrants come from.
Her family claim to have paid smugglers £30,000 for their daughter to travel to the UK via China “in search of a better life”.
Tra My’s parents, Nguyen Thi Phong and Pham Van Thin, told CNN it was “very painful” to receive the text – saying she must have known she was going to die when she sent it.

“I’ve lost both my loved one and my money,” her father Pham said, claiming he and his partner scraped together the money to pay for their daughter to travel to the UK.
The pair, who make around $400 a month between them, said the smugglers did not tell them how their daughter would be transported to the UK.
“The smugglers said that this was a safe route, that people would go by airplane, car … if I had known she would go by this route, I would not have let her go,” Pham added.
A human rights worker in Vietnam, who has spoken with Tra My’s family, revealed she went on the journey because her family was in debt and she was desperately trying to help them.
“She had just returned from Japan where she was working to try and pay off the debt. And that was not enough and so she looked for a better future,” the human rights worker told the BBC.
Asking to remain anonymous, the human rights worker continued: “For this girl it is very sad that she took the risk because she was dealing with debt that was created by another man in the family.
“And I also learnt that the service that she was using was called ‘very important service’ and so it is like a business class ticket on the lorry and with that she had to pay double or three times the price of the cheap ticket.”
Tra My’s family mortgaged the house to get that money for her, the human rights worked added.
Tra My’s last text messages were sent at 10.28pm BST on Tuesday – two hours before the truck reached the UK, as it was en route from Belgium.
She told her mother: “I’m sorry Mum. My journey abroad hasn’t succeeded. Mum, I love you so much. I’m dying because I can’t breathe.”

Tra My’s brother told the BBC on Friday that his sister had told them not to contact her because “the organisers” did not allow her to receive calls.
He said she flew to China from her home in Can L?c, a rural district of Hà T?nh Province in Vietnam, then left for France and initially attempted to cross the border into the UK on October 19, but “got caught” and turned back.

Another of the suspected victims was revealed to be Nguyen Dinh Luong, 20. He was from an impoverished Vietnamese province who had dreams of a better life in Britain.

His father Nguyen Dinh Gia said his son told him two weeks ago he planned to travel to Britain from France, where he had been living illegally since 2018. He said he would pay $14,000 for the journey and planned to work in a nail salon when he got to Britain.
But Gia told AFP that he got a call several days ago from a Vietnamese man saying, “‘Please have some sympathy, something unexpected happened.”
He added: “I fell to the ground when I heard that.
“It seemed that he was in the truck with the accident, all of them dead.”
His father told The Associated Press he had not been able to reach him since last week. He had said he would join a group in Paris that was trying to reach England.

Nguyen Dinh Gia said: “He often called home but I haven’t been able to reach him since the last time we talked last week. I told him that he could go to anywhere he wants as long as it’s safe. He shouldn’t worry about money, I’ll take care of it.”
He said his son left home in central Ha Tinh province to work in Russia in 2017, then on to Ukraine. In April 2018, he arrived in Germany then traveled to France. He told his family that he wanted to go to the UK.

Another of the newly named suspected victims is Nguyen Dinh Tu. A few months ago, he asked his wife Hoang Thi Thuong to help him raise £11,000 to cover the cost of an illicit trip from Germany to the United Kingdom.

His wife Thuong said with tears in her eyes: “I lost contact with him on October 21. I have a big debt to pay, no hope, and no energy to do anything.”

Tu’s father said relatives in the United Kingdom had told him that Tu was inside the truck, and had been planning to pick him up.
“They were supposed to pick him up at the drop-off point but they called and said Tu was in that truck,” Tu’s father, Nguyen Dinh Sat, said. “I haven’t heard anything from my son.”

Father-of-two Vo Ngoc Nam, 28, is also feared to have been in the ill-fated container.

His wife, Ta Thi Oanh, told Vietnamese media that he had called her last Tuesday afternoon to say he was on the truck going to Britain. He asked her to call her parents and ask them to pray for him, but has not been heard of since.
Mr Nam’s father, Vo Ngoc Luyen, said: “After reading information about the 39 people in the container in the UK, my family is extremely shocked. We are anxiously waiting for official information from the authorities.”

Cousins Hoang Van Tiep and Hung Nguyen, 33, were both feared to be in the container. Their aunt posted photographs on social media in the hope that they might be found alive.