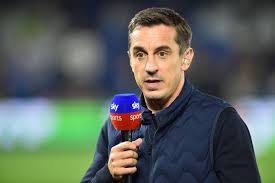 Gary Neville replied back at snipes directed at him from Paul Pogba’s agent Mino Raiola, as he reiterated his belief that the French World Cup winner wants to leave the club.

Raiola suggested Neville’s suggestions that Pogba is not committed to United have affected his image among the club’s supporters, with his return to action for the first time since September 30th in Sunday’s 2-0 defeat at Watford reopening the debate over his future at the club.

Real Madrid are still believed to be keen to sign Pogba in next month’s transfer window, with United legend Neville pulling few punches in his assessment of the club’s record signing as he responded to Raiola’s snipes.

undefined
“Paul Pogba is Manchester United’s best player, let’s be clear about that. He is the best player in the club. The big question mark is over his long-term future at the club because a large part of me believes he wants to play football elsewhere.

“It’s not a good look when your best player says he wants to leave because the team isn’t good enough. Manchester United have to get better players into the club, experienced players who can help the young players. They need some short-term experience in that squad.”

Pogba made a positive impression as he came back into the United set-up at Watford despite their woeful team display, with Neville insisting he needs to fully commit to the cause or move on as soon as possible.

“It doesn’t surprise me that they create more when he comes into the team,” he added. “We know Pogba will score goals and get assists, but every week single week Ole Gunnar Solskjaer is fielding questions about his future, so he needs to settle down at the club, or he needs to leave.

“The team has developed without him. They need players who want to be at the club. I think Solskjaer is playing a clever game right now, or he desperately wants him to stay. If he came out and said Pogba does not have a future here, then it would depreciate the price heavily.

“So I think he’s saying Pogba has a future here, but I can’t believe there isn’t something going on behind the scenes, especially when you hear the agent’s comments this week.

“Every inclination I get from the situation is that he wants to play football for someone else. My view would be that Manchester United would be better off without that if that’s the case. I think there will be clubs interested next month.”