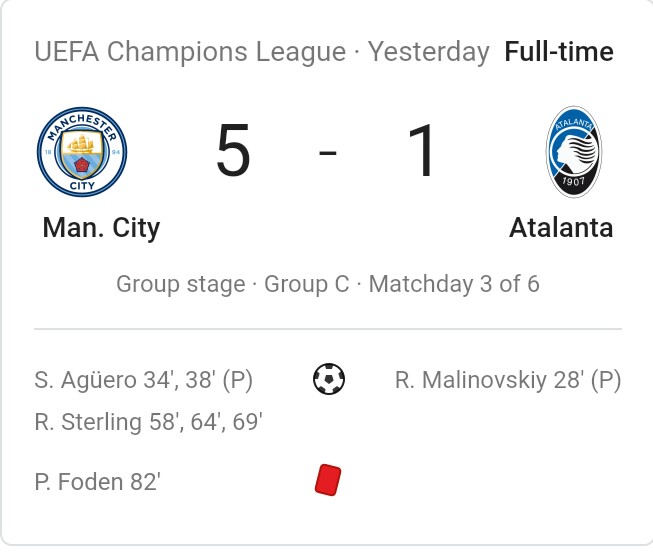 Manchester City blasted back at manager Pep Guardiola in the best possible way, with five goals and three points.

Raheem Sterling ’s hat-trick and a first half brace from Sergio Aguero turned the game around after Atalanta had taken a shock lead.

But the Blues ’ 5-1 win gave the perfect answer to a manager who had questioned whether they were deadly enough in front of goal to really make a dent in this season’s Champions League .

Raheem Sterling of Manchester City celebrates after scoring his third goal during the UEFA Champions League group C match between Manchester City and Atalanta at Etihad Stadium on October 22, 2019 in Manchester, UK.

That means they now need a victory in the return game in Milan in a fortnight to secure qualification for the knockout phase, with two games to spare.

Guardiola had suggested that his team were not quite ready to win the Champions League, as they prepared for the group game against Serie A’s third-placed team.

He was not suggesting the £500million investment was not enough, he was simply saying that so far this season they have not been lethal enough in the opposition box, and a touch too generous in their own.

And, while they gifted the visitors a penalty which brought a shock lead, City showed they have plenty of firepower at the other end.