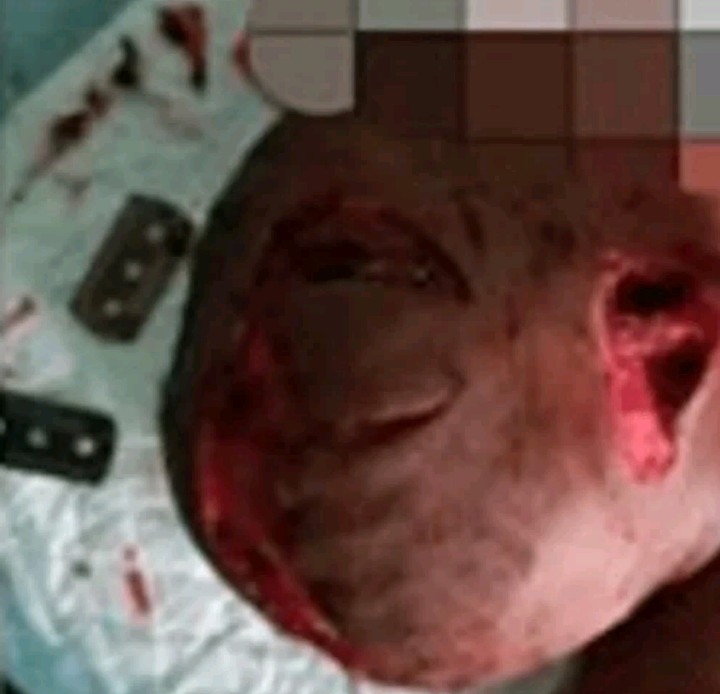 A one year old boy was almost killed after he was viciously attacked by a dog owned by one Regimental Sergeant Major (RSM) in CBA, Mambilla Barracks, Abuja on Tuesday October 8th.

The black dog, believed to be a pitbull, was said to have broken free from its cage and wandered off into the block where little Michael was playing with his four-year-old brother.

Upon seeing the dog, his older brother immediately fled into the house but Michael was not quick enough as the dog pounced on him.

The dog subsequently grabbed him by the head and pulled him about 30 metres away and began to bite him repeatedly.

A neighbour, who wished to remain anonymous, said she quickly raised the alarm.

She said, “I was by my balcony when I saw the dog grab Michael by the head. The dog bit his ear and tore off his scalp, exposing his brain.

Incidentally, Michael did not scream as his blood littered everywhere. About four of us began throwing stones at the dog in a bid to get him to free Michael to no avail.

“Someone was able to get a cutlass and slashed the dog with it but it would not let Michael go. It was when the cutlass hit the face of the dog that the dog fell and died.”

It was learnt that a soldier, a Regimental Sergeant Major, who owns the dog, became furious at the killing of his dog when he was informed.

Another neighbour, who craved anonymity because military personnel are not allowed to speak to the press, said the RSM had about seven dogs.

He said the dogs had been terrorising residents especially children but all complaints to military authorities had fallen on deaf ears.

He said, “Some weeks ago, the same dog was let loose and began chasing children all over the place.

“A little girl fell into a gutter while running. I personally had to save the girl and chase the dog away.

As a soldier I am not afraid of the dog but these little children playing in the barracks are not safe.”

Our correspondent, who visited the block where the RSM resides, was greeted by the loud barks of dogs.

Attempts to speak with soldiers within the vicinity were rebuffed as he was told that he would need to get permission from the military authorities.

Meanwhile, The PUNCH was informed that Michael was given first aid at the barracks clinic before being transferred to Cedacrest Hospital, Apo.

The father of the victim was said to have donated two pints of blood to his son who was still in critical condition on Wednesday.

The father of the victim refused to speak to The PUNCH on Wednesday, saying, “please get permission from my superiors before talking to me.”