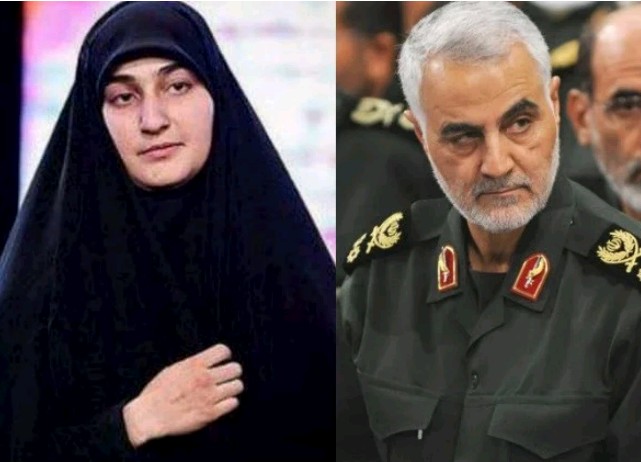 Zeinab Soleimani, the daughter of slain Iranian general Qassem Soleimani who was killed in a United States airstrike ordered by President Donald Trump last week has threatened an attack on the U.S. military in the Middle East.

Zeinab sent out the threat while speaking to a crowd of hundreds of thousands in Tehran.
‘The families of U.S. soldiers in the Middle East will spend their days waiting for death of their children,’ she said to cheers.

Esmail Ghaani, the Iranian general who replaced Qassem Soleimani after his death also vowed to take revenge while speaking on Monday in an interview with Iranian state television.
‘God the almighty has promised to get his revenge, and God is the main avenger. Certainly actions will be taken,’ he said.
‘We promise to continue down martyr Soleimani’s path as firmly as before with help of God, and in return for his martyrdom we aim to get rid of America from the region,’ Ghaani added.

Related Topics:'The families of U.S. soldiers in the Middle East will spend their days waiting for death of their children' - Daughter of slain Iranian general vows revenge
Up Next

Smoke from Charcoal kills 2 friends as harmattan worsens in Jos