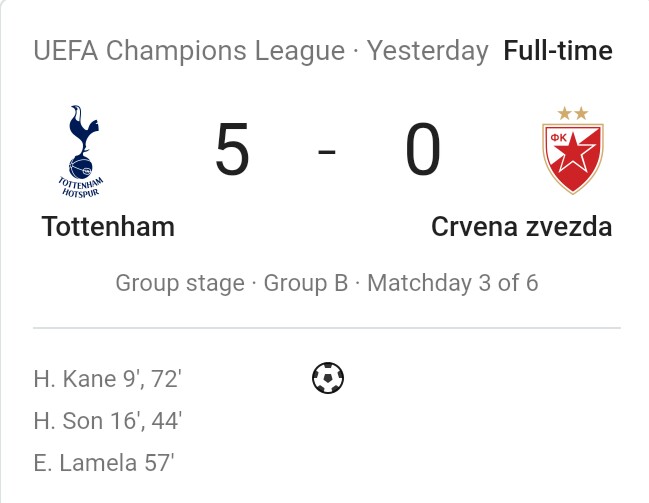 Much better from Red Star, who have finally decided to start playing, albeit after going two behind. Having sat back and let Tottenham come at them in the opening 20 minutes, they’ve finally started pressing their hosts. Marko Marin is running proceedings, while right-back Marko Grobeljic has just had two shots in quick succession. The first was blocked, while the second is deflected wide by Tomane. A good attacking move from Spurs ends with a curling Aurier cross from the right towards Dele Alli at the far post being intercepted.

Red Star went forward again, but lose the ball in the Tottenham right-back position. Ben Davies tries to clear but is pressed hard by Marko Gobeljic. A little too hard, it seems – Spurs have a free-kick and clear their lines.

Marin loses the ball in midfield, gifting possession to Dombele. He surges forward and plays the ball between two defenders into the path of Son. As the goalkeeper dashes off his line, Son tucks the ball into the back of the net. Hats off to Harry Kane, by the way, whose decoy run took two defenders out of Ndombele’s path. Hats firmly on to Marin, who lost the ball on the halfway line and was punished mercilessly.

Tottenham go in for the break with an emphatic lead. They took advantage of a lacklustre start from Red Star to go two up early doors through Harry Kane and Son, with Erik Lamela acting as provider on both occasions. Red Star worked their way back into the game with Marko Marin pulling the strings, but a hideous error by the Red Star skipper gifted possessino to Spurs moments before half-time and Tangey Ndombele took full advantage to tee up Son for his second goal of the night. In the 47th minute Rajiv van la Parra is fouled by Tanguy Ndombele halfway inside the Tottenham half. Free-kick for Red Star. Marin floats the ball towards the far post, where it’s shepherded back to Gazzaniga.

Harry Kane curls a brilliant left-footed cross into the Red Star penalty area. It’s on a plate for Erik Lamela, who sticks out a foot and pokes the ball high over the bar.in the 51st minutes

Kane plays the ball out wide to Aurier, who sends a low cross into Lamela in the Red Star penalty area. Unmarked with his back to goal, he has time to turn and pick his spot, firing into the bottom corner. That is atrocious defending from Red Star. Pamela scoresin the 57th minutes

Tottenham substitution: Son off, Eric Dier on. The South Korean has been outstanding tonight and obeys the new rule that dictates he must leave the field at the nearest point of exit and walk the long way back to the dugout. It might take him a while, as he’s happily giving high fives to any supporters with ringside seats who wants one on the way.
Harry Kane receives a pass from Eric Dier and his first touch in the Red Star penalty area is poor. He adjusts his feet, looks up and passes the ball into the far corner from a narrow angle. A wonderful, inch perfect finish – it’s like he was threading a needle. To make five nill

Peep! Peep! Peeeeeeeeep! It’s all over at White Hart Lane, where Tottenham Hotspur have swatted their Serbian visitors aside with a minimum of fuss. Harry Kane and Heung-min Son got two apiece, while Erik Lamela got the fifth as Mauricio’s side got a much-needed confidence boost following three poor performances in a row. Full time: Tottenham Hotspur 5-0 Red Star